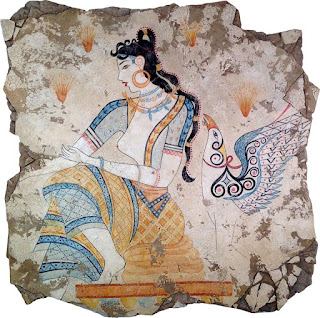 Saffron Goddess, 1600 B.C.E. (Minoan) Was Plato right? Is it true that the people we now refer to as the Atlanteans were in fact prehistoric sailors; flourishing merchant empires, long forgotten due to natural disaster, the rising of the sea levels and the lack of proof, due to the erosion caused by sea and sand or because their traces have been buried underneath tons of volcanic debris? Coming up: How could we be so blind? The lost knowledge of our ancestors. The book that explains everything. The story behind the author. Where to buy/download the book. How could we be so blind? We already know that for more than 17.000 years, the Mediterranean Basin has been sailed upon by prehistoric pioneers, fishing boats and merchant ships. Even the territory west of the European Continent was explored extensively by boats following the coastline and crossing over to the British Isles and Ireland, perhaps even beyond. At the time, the northern half of Europe was under the spell of the last small
Post a Comment
Read more