June 26, 2020
Was Plato right? Is it true that the people we now refer to as the Atlanteans were in fact prehistoric sailors; flourishing merchant empires, long forgotten due to natural disaster, the rising of the sea levels and the lack of proof, due to the erosion caused by sea and sand or because their traces have been buried underneath tons of volcanic debris?
Coming up:
How could we be so blind?
We already know that for more than 17.000 years, the Mediterranean Basin has been sailed upon by prehistoric pioneers, fishing boats and merchant ships. Even the territory west of the European Continent was explored extensively by boats following the coastline and crossing over to the British Isles and Ireland, perhaps even beyond. At the time, the northern half of Europe was under the spell of the last small Ice Age. Therefore, it was mainly covered in snow and ice for many months of the year, and even permanently in the far north, creating natural bridges from northern Scandinavia and northwestern Europe to the western continent of the Americas, where people had already traveled to, many millennia earlier, as prehistoric human remains found there tell us. Trade and exploration brought cultural welfare and a sharing of knowledge, cultures and ways of life, which could have led to higher civilizations than we may have originally thought.
For years, the name Atlantis alone has been urging scholars and historians into an immediate denial. Quickly, they send the ancient historical account of a high prehistoric civilization to the realm of myth and legend, without even looking for historic evidence, which is, in fact, all around us. This ancient civilization was called Atlantis by Plato from Athens [ca.427 B.C.E. - 347 B.C.E.] and other philosophers from the days of classical Greece. These men, who were well respected and sometimes even important politicians, merely put a name to these forgotten peoples, unaware that, 2400 years later, their accounts would be waved away, only because most modern scholars and historians are afraid to lose their reputation by seriously researching the topic. But today we should know better than that. We need to rise above ego, explore the lost civilizations with renewed spirit, study the knowledge they left us and learn from them and their fate. For today we are heading into the same cataclysmic direction.
The lost knowledge of our ancestors
Our prehistoric ancestors have been worshiping and respecting nature ever since the day that the first humans on our beloved planet became aware of its powers and delicate balance. Respecting the elements and spirits of the universe - here on earth as well as in the heavens - humankind adapted to the laws and mysteries of this world, and created a way to understand the laws and mysteries of the next.
For many millennia, clans worked together without warfare, save the odd incident between rivaling tribes.The first art forms date from at least 44.000 years ago, proving that humans were already intelligent enough to create intricate and clever artwork. Dating back to 16.000 to 12.000 years ago we find the thriving tribes of the Cro Magnon peoples in southern France and northern Spain, who cultivated their own crops and kept their own cattle.
The chance of finding a thriving, high civilization by 10.000 B.C.E., the era mentioned in the Atlantis story, is highly likely. Of course their lives were different from ours, for they lived in a different world. They were less demanding and more content. At least until greed and the lust for power turned a successful matriarchy into an aggressive patriarchy.
The balance between humans and the natural world was only disrupted when, in the late Neolithic period, the art of metallurgy was discovered. Trees were cut down to feed the ovens that melted the metals from the rocks to create tools and weapons. Not long after that, capitalism took over, leading people to greed and to selfish acts, personal material growth and the over-exploitation of natural resources. Entire islands in the Mediterranean were deforested to supply the sudden increasing need for firewood and building material for houses and ships. The disruption of the natural balance of this planet brought forth multiple natural disasters and extreme weather. Unfortunately, we are doing the same thing today.
Luckily we still have some of their knowledge left; the art of medicine in homeopathy, the art of philosophy in e.g. the ancient Veda's, the Gnosis and the Hermetic Teachings, in the knowledge of the Rosicrucians and other mystical and spiritual groups. But even this knowledge is currently under threat, as capitalism, aggression, greed, egoism and anger are creating chaos and violence in this already suffering world. After millions of years of evolution, humankind now stampedes the globe, crushing under foot our natural environment, a fragile ecosystem we simply cannot live without. So we must cherish and share this knowledge, and pass it on to the generations who come after us. 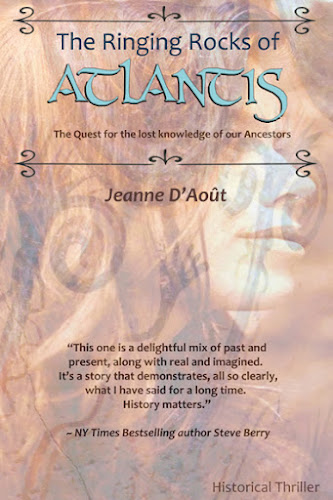 The book that explains everything

‘THE RINGING ROCKS OF ATLANTIS’

The Quest for the Lost Knowledge of our Ancestors

This latest work of author JEANNE D’AOUT will no doubt captivate a large audience, as this fast moving historical thriller novel is filled with esoteric knowledge many people are seeking today. Apart from the fact that the subject of Atlantis is timeless, it is again a hot topic today. Early readers already called ‘The Ringing Rocks of Atlantis’ a real page turner with captivating story lines (reviews below).

The book is available on eBook (Kindle, Nook, Kobo and other formats) and on paperback. www.jeannedaout.com/atlantis.html

Some secrets are meant to be uncovered. When Alfred Zinkler's heirs discover a secret room hidden behind a bookcase in SBS-Sion's HQ, the ancient secret they happen upon propels the team headfirst into an amazing new quest: the search for Atlantis.

"This one is a delightful mix of past and present, along with real and imagined. It's a story that demonstrates, all so clearly, what I have said for a long time. History matters." ~ New York Times Bestselling author Steve Berry

"A magnificent story - but even more than a story, for it contains a theory of world history that is both intriguing and enlightening. Jeanne D'Août is no less a thinker than a storyteller. Her tale has us winging through history and geography, and takes a lot of putting down once you start it. This third volume unfolds a new set of adventures around time travel, but has a serious message. As we swing between the ancient world and present-day Switzerland, an extraordinary myth comes to life. We and our past have the deepest reverberations and connections, and knowing the past can heal us." ~ Dr Colum Hayward, Polaire Publishing and author of 'The Once and Future John'

"Jeanne D'Août skillfully weaves a tasty tale of suspense and esoteric intrigue. Time travel - and its consequences, ancient Celts, Atlantis, and the legendary relic hunter Otto Rahn; it's all here, served up with a sumptuous measure of veiled historical truths. Some say truth may be stranger than fiction, but what if the so-called fiction is actually true? Fans of Dan Brown, and enthusiasts of historical mysteries, strap yourself in and enjoy the ride." ~ Andrew Gough, writer and television history and mystery show presenter

"It is a great tale - intriguing and provocative. It delves deep into human relationships, the history that underlies Western perspective and provides a way that technology will change our experience and our view of our existence. It is like going through a door into a hidden room where secrets are uncovered but where the real secrets are held in another room, beyond the first." ~ Greg Rigby, author of 'The God Secret' and 'On Earth as it is in Heaven'

‘The Ringing Rocks of Atlantis’ 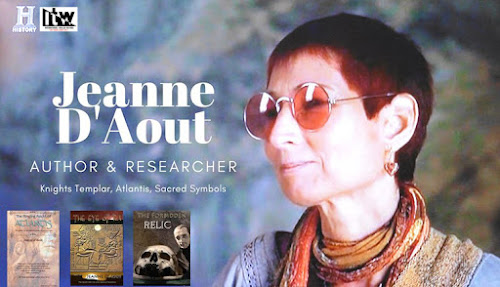 The story behind the author
Since 2007 a resident of the southern French department of the Aude-Pyrénées, a.k.a. Cathar Country, Jeanne D'Août is not only an author, but also a tour guide in southern France and tour organizer in Greece, and a passionate photographer and producer at PanOccitania Media. Since early childhood she enjoyed studying the lost history of civilization, the first centuries of Christianity, Gnosis and Mysticism. With her adventure novels, which were published worldwide in English, she has already drawn many people to beautiful Occitania, France, with its many mysteries, forgotten history and stunning Lord of the Ring-like landscapes.

Jeanne D'Août has written three novels: The Forbidden Relic,The Eye of Ra and The Ringing Rocks of Atlantis. She has been interviewed as an expert on relic hunter Otto Rahn (1904-1939) for two international documentaries: ‘Himmler and the Holy Grail’ (Sky Channel) and ‘Lost Relics of the Knights Templar’ (History Channel). She has also written several articles for international magazines such as ‘The Heretic’ and ‘The Saunière Society’, and has been a guest on several TV and radio shows, including a live TV talk show in Las Vegas in 2013. In the Summer of 2015, Jeanne became a member of the ITW (International Thriller Writers Org.).